Each day this week we will feature a story about a SWTX Conference Reconciling United Methodist to take us through Annual Conference, which begins this Thursday, June 6 in Corpus Christi, Texas.  These stories will also be featured at our SWTX Reconciling Ministries Team table.  We invite you to stop by and visit with us! 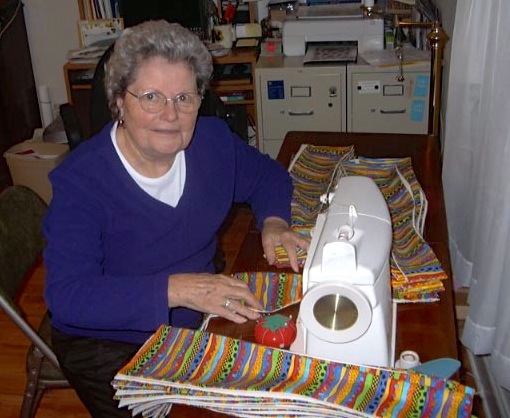 SWTX Reconciling Ministries Team provides rainbow stoles at our Annual Conference for those who wish to witness for God’s inclusive love.  The history of rainbow stoles and instructions for making them can be found HERE.

One of our talented stole makers is Dixie Fulp, a member at First UMC Austin, whose congregation affiliated with Reconciling Ministries Network in February this year.  We asked her to share her story with us, and she gave us permission to share it with you:

“After over 20 yrs of Air Force moves, my then husband retired and we moved to Austin in 1980 and soon found FUMC.  After my divorce I was on staff at FUMC and retired after 18  years.  I moved away to help my widowed sister, and two years later knew I had to return back home to Austin.  I have one daughter and two granddaughters, and in February I became a great-grandmother for the first time.

I was introduced to a lady in New York state with Parents Reconciling Network who asked me to help make stoles for General Conference.  I believe that was in 2006, and I have been doing it ever since, either for them or for our own group.  I think I sent 50 stoles last year to Annual Conference and this year it is 75.  I have no idea how many have been made in all that time, but it has been many.

My story started with my nephew coming out.  When I was asked to speak to our congregation at a time when were getting bolder in trying to educate our own church members, I told her I was not a public speaker so I could not do it.  At the time I was making a batch of stoles.  As I sewed, I felt God’s call telling me that yes, I COULD do it.  I got up from the sewing machine and sat at the computer with my fingers racing across the keyboard.  Later with hands and voice shaking, I did actually speak to the congregation with my story (and repeated it many times in our Reconciling workshops).

I was privileged to get to attend a RMN Convocation in 2009 in Estes Park and it was such a wonderful experience that I recommend that everyone try to attend this year’s Convocation.

I am now 75 yrs old and am so happy to have lived long enough to see my church, First UMC of Austin, become affiliated with the RMN –  after a 25 yr struggle and the patience of so many. ”